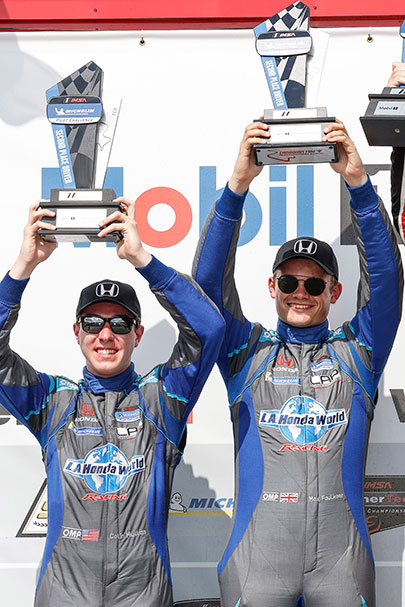 Having taken over from starting driver Faulkner mid-race, Mullan challenged for the lead, but made heavy contact with the Turn 9 tire barriers after cutting a tire.  Resuming with damage to the right side of his Honda Civic Type R TCR, Mullan took advantage of a late-race shuffle of positions at the front of the field to emerge in second behind eventual class winners Mikey Taylor and Britt Casey Jr.

After stretching his fuel mileage to assume the race lead, Stephen Simpson made contact with Casey with less than 10 minutes remaining in the race, sending both cars briefly off track and providing Todd Lamb with the opportunity to move into second in the Atlanta Speedwerks Honda that had been started by Brian Henderson.  Just a few laps later, Lamb was forced to drive off course to avoid a slower car exiting Turn 5, ending his chances at victory and resulting in a fourth-place finish for the pair.

Following five of 10 rounds, LA Honda World teammates Tom O’Gorman and Shelby Blackstock continue to lead the TCR Drivers’ Championship, despite dropping out of today’s contest in the early laps after an issue with their car’s transmission mount triggered a failure in the wiring harness.  Contact from another competitor also ended the race early for the Honda of America Racing Team duo of Chad Gilsinger and Ryan Eversley.  Despite these setbacks, Honda holds a six-point lead in the TCR Manufacturers’ Championship over rivals Audi, Hyundai and Alfa Romeo.

Colin Mullan (#52 LA Honda World Honda Civic Type R TCR) Started 6th, finished 2nd: “I'm so happy to have some luck go our way for the first time this season, bringing home a second-place finish for the L.A. Honda World team. The Civic Type R TCR was quick as always, while also being incredibly reliable throughout a race of attrition. We kept our nose clean when we needed to, capitalizing on the battle up front to secure the our first podium of the season. Overall I'm really happy with our finish and hope to be on the top step of the podium soon!"