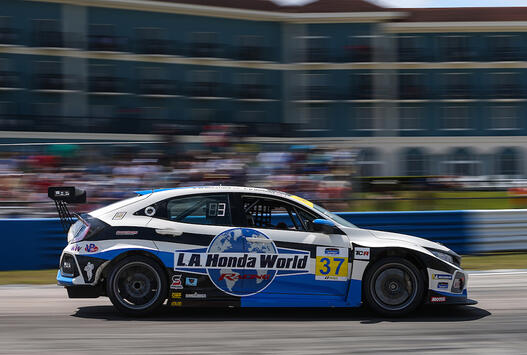 An apparent TCR class win for the Honda of America Racing Team was lost Saturday at Road America, when a strategic decision to make its sole scheduled pit stop at the last possible moment left Ryan Eversley fewer than 10 seconds short of the required minimum drive time at the finish.

A fast-moving thunderstorm rolled through the Road America circuit during the buildup to the seventh round of the MICHELIN Pilot Challenge series, leading to a delay of just over an hour before lightning ceased in the area.  As a result of the late start, the race distance was shortened to 75 minutes from the originally scheduled two hours.

With the track quickly drying as the race started, many of the 32 teams in the field elected to start on dry weather “slick” tires.  However, with rain expected to return before the end of the race, pit stop timing would become crucial.

Starting from the pole in his LA Honda World Civic Type R TCR, Shelby Blackstock initially ran at a conservative pace as the track continued to dry, then rapidly moved up to second during a long opening stint.  As Blackstock handed off to co-driver Tom O’Gorman with just over 30 minutes remaining, the team elected to remain on slicks for the final stint.

Also on slicks from the start of the race, Chad Gilsinger ran even longer and cycled his way up to the front of the field in his HART Civic Type R.  When rain returned, Gilsinger was the final driver to pit as the HART team changed to grooved, wet-weather “rain” tires and Eversley took over the driving duties.  Eversley quickly resumed at the front of the TCR field, but race officials determined that he exited pit lane with only seconds fewer than the required 25 minutes remaining.  The resulting post-race penalty moved Eversley and Gilsinger to the rear of the TCR field.

As a result, the Bryan Herta Autosport Hyundai of Harry Gottsacker and Mason Filippi – who had also pitted late and chosen rain tires for their final run – caught and passed O’Gorman’s slick-shod Honda in the final laps to take the victory.

With their second-place result, O’Gorman and Blackstock closed to within six points (196-190) of TCR Drivers’ Championship points leaders Mark Wilkins and Michael Lewis, with three races remaining.  Honda continues to lead the Manufacturers’ Championship, with 129 points to 125 for Hyundai and 123 for Audi.

The MICHELIN Pilot Challenge travels to the Virginia International Raceway, near the Virginia-North Carolina border, for the August 24 two-hour Virginia is For Racing Lovers Grand Prix.  The race can be streamed live on IMSA.tv with IMSA Radio commentary.

Shelby Blackstock (#37 LA Honda World Honda Civic Type R TCR) TCR pole qualifier, finished second: “It was interesting, for sure.  This is the first time I’ve been in the rain in this car – and also on slicks!  So, there was a bit of ‘learning the car’, learning how it reacted the first couple of laps.  Then, everything just came to us. At one point, I think we were four seconds a lap quicker than anybody on track.  I can’t say enough for Honda, HPD and LA Honda World.  The car was amazing the whole race.”

Tom O’Gorman (#37 LA Honda World Honda Civic Type R TCR) finished second: “In today’s race, with the shortened time and different drive times, there was just a completely different strategy that we had to wrap our heads around.  We were the only car in the top three to run dry tires throughout the race, but we were in a position to ride it out and it was a good day.”