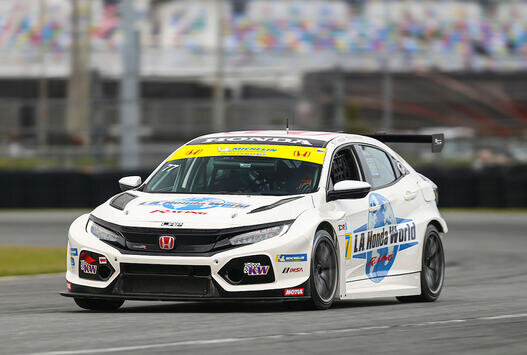 Adapting quickly in her first laps at Daytona International Speedway onboard the L.A. Honda World Honda Civic Type R TCR in preparation for the season-opening IMSA Michelin Pilot Challenge race later this month, Taylor Hagler closed out the Roar Before the 24 weekend with lessons learned after the three day test.

The rising talent made her IMSA debut with L.A. Honda World alongside veteran Honda driver, Ryan Eversley. Learning the 12 turns and 31 degrees of banking at Daytona International Speedway for the first time was the focus of the weekend, having never driven at the 3.56-mile course.

"It felt great getting to drive at Daytona for the first time,” said Hagler. “It is a lot of fun to drive the high banking with a car that feels so good. The infield portion of the track is a little tricky for me but I continued to work on it each time out. Each session I get more comfortable and I’m able to push the braking zones later while putting more power into the acceleration. Overall, it's been an amazing experience to be able to drive a race car around this place."

Sharing driving duties with Eversley, Hagler posted 116 total laps in the No. 77 L.A. Honda World Civic Type R TCR from Friday to Sunday. The first session saw the No. 77 Civic experience vibrations which limited the track time to just 13 laps.

Friday’s second session saw more track time for Hagler allowing her to get comfortable in the TCR machine. In-between sessions, Hagler has leaned on Eversley - who has over 12 years experience racing with Honda - for advice and feedback.

"Partnering with Ryan (Eversley) is fantastic-I wasn’t sure what to expect at the start because I had only worked with him once before this weekend,” said Hagler. “Now that I’ve spent more time with him, we get along very well and he helps me when I am in the car and we go over data after each session as well. We even joke around with each other in our down time, so it’s been a fun weekend working with him.”

Hagler was quick to improve her lap times, scraping off 4.5-seconds from the first practice session to the sixth and final session on Sunday - closing out the weekend with a personal best lap time of 2:02.301-seconds.

"Working with Taylor is great,” said Eversley. “My favorite thing about her is that she remains calm in every situation whether that be in an exciting moment on track or an uncertain thing she has never experienced in a race car. Her focus remains on the next lap and not stuck thinking about what just happened. For the amount of time she has been racing, she is far more experienced in her communication than most. Her maturity is beyond her age which makes partnering with her easy. Each session she keeps improving and pushing herself more and more. Being fully comfortable on the banking and in the quick braking zones will come with more seat time but she is progressing quickly.”

Hagler will return behind the wheel of the No. 77 L.A. Honda World Honda Civic in just a few short weeks as she returns to Daytona International Speedway on Jan. 22 for the BMW Endurance Challenge (Jan. 24).