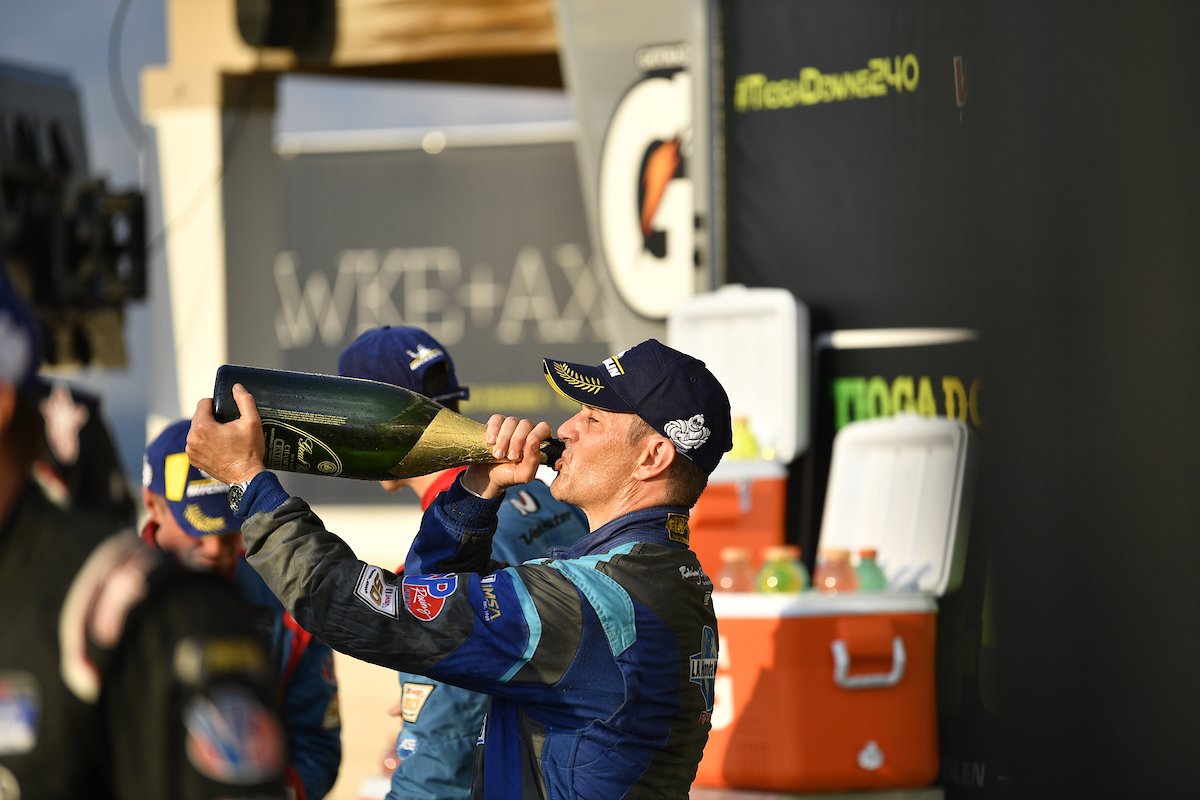 “With 35 minutes remaining in the Tioga Downs Casino Resort 240, it was hard to imagine the No. 73 L.A. Honda World Honda Civic TCR would salvage even a finish in the TCR class at Watkins Glen International, let alone a podium.

Pombo’s Honda Civic TCR –- which he co-drives with Mike LaMarra –- was a victim of racing in the rain on slick tires, skating into the Turn 11 barriers alongside a GS car to bring out a full-course yellow.
Running second at the time, Pombo was able to gather himself up, rejoin without losing a place and carry on as the race restarted with approximately 15 minutes left.

Not having changed tires, the No. 73 Honda suffered early on the restart and Pombo watched the No. 98 Bryan Herta Autosport Hyundai Veloster N TCR driven by Mark Wilkins pull away on wets. But, the track quickly dried, and conditions came back to favor L.A. Honda World.

After trailing the Hyundai by more than five seconds at one point, the No. 73 soon captured the lead and sped off to an impressive 21-second victory.

“I actually wrecked today and still won! You know somebody’s looking out for you when that happens,” said Pombo. “It caught me off guard on that last turn; it was just a lot of rain. I saw it in front of me and slowed down way more than I had before, but there just wasn’t any grip. The hardest part wasn’t the hit; it was trying to find reverse. Once I got going and we didn’t lose a lap, I knew we’d be in good shape. Today was more about everyone else than it was about me, to be honest.”

This is the third consecutive year that a Pombo has been atop the podium at Watkins Glen. Mat won in 2017 with the MINI JCW Team in the ST class, while his brother, Mark, took the same victory one year later.

Sneaking in to earn their second straight podium finish was the No. 61 Roadshagger Racing by eEuroparts.com Audi RS3 LMS TCR of Gavin Ernstone and Jonathan Morley.

The NBCSN television broadcast of the Tioga Downs Casino Resort 240 will air on Thursday, July 11 at 6 p.m. ET.

The IMSA Michelin Pilot Challenge has a quick turnaround for its upcoming race, to be held next weekend (July 5-7) at Canadian Tire Motorsport Park. The Saturday, July 6, race starts at 1:55 p.m. ET, and can be streamed live on IMSA.tv with IMSA Radio commentary.

For news and updates on Pilot Challenge, please visit IMSA.com or join the conversation on social media using the hashtags #IMPC or #IMSA.