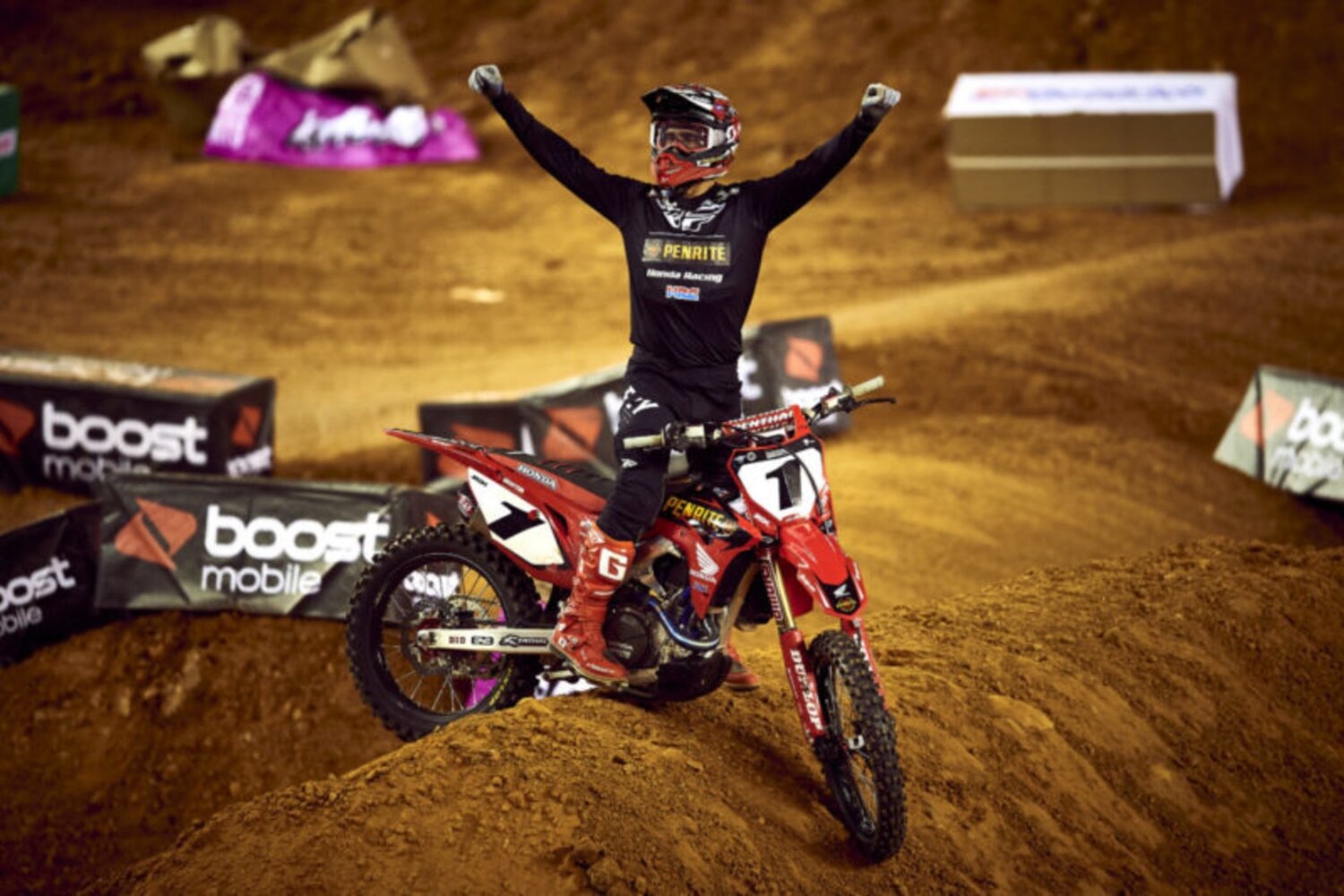 Justin Brayton suffered several broken ribs during a crash mid-way through the 2019 Australian Supercross Championship. The veteran said later he was pretty banged up and thought about heading home to heal up for the 2020 Monster Energy AMA Supercross Championship but decided to give it a go at the at the S-X Open in Auckland, New Zealand.

In Auckland, his night didn’t go as planned as he washed out the front end while leading the pack. He finished 3-4-5 for fourth overall and fell one point behind Luke Clout, who finished 4-1-4, in the SX1 points standings.

Before the final round, Brayton said he felt he was in a good position, having to charge from behind instead of riding safe with a lead. The strategy worked out for Brayton, who went 1-2-3 to claim his first AUS-X Open overall win and his fourth Australian Supercross Championship.

After the race, Brayton gave some insight into his thoughts entering the final round and racing perspective from his age.

Racer X: Now four-time champ of the Australian Supercross Championship is Justin Brayton, but a lot different this year the road you had to go through to get it. You said you actually liked being in that position to kind of having to gain some points in the final race. Were you telling yourself that to pump yourself up, or was it really true? What’s the truth, now that you look back at it?Justin Brayton: Yeah, both situations are tough because especially when you have a gap between the second-to-last round and the last round. Previously I’ve had pretty big points leads where you kind of just want to hang out and not really ride much and it’s hard to stay in that normal routine, where this time I knew what I had to do. So the past two weeks was forward focus and full steam ahead. I came in here, there was a little bit of pressure but also I was happy to be in that situation after the second round. I had a decent—it was actually a little crash, but ended up being some decent injuries where I broke four ribs. So right there sitting in the hospital I was like, “Do I just go home?” Thankfully it was during a couple-week break, so showing up to round three I honestly didn’t know. I didn’t know if I would be able to ride, so I tried to ride press and it was actually not terrible. So right then I was like, if I can just have a shot at the last round, I just want to have a chance. I don’t know if it’s ten points down or one point or what. So that’s what kind of shed some pressure off of me was I’m happy to even be in this situation. One of my big goals this year was to win AUS-X Open. I’ve been so close a few times and just never been able to close the deal. A lot of it is because just you’re tip-toeing around the last round. You’re like, “I need to get a fifth or whatever,” so you just kind of ride around. I hate doing that. It was good to execute the night and get good starts. It was fun.

For any athlete to come into a must-win situation and then do it, win the race, win the title—that’s like everybody’s dream. So does this mean more than the other titles because you were able to do it in this fashion?Yeah, it definitely does. It for sure does, especially with how much I’ve had to talk about it the past two weeks. I was just so sick of talking about it. I was telling people about this week. I’m like, “This guy wants to do an interview. I’m so sick of talking about it. I just want to race.” Even friends and family calling and this and that. I couldn’t wait to get behind the gate and to finally get it done, and to finally win AUS-X Open, that was the main goal. So with that goal, you win the championship as well. Happy to win both. 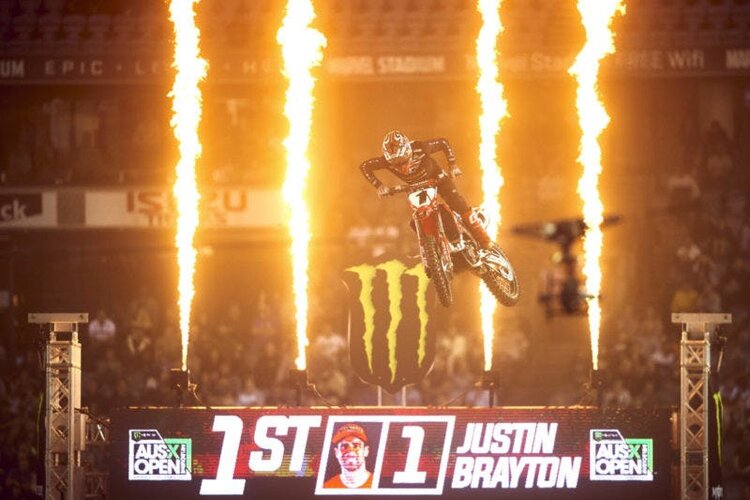 The races, Luke Clout went down early. I don’t know if you saw that. Did you know exactly all the scenarios that were going down, as far as the championship was concerned?Yeah, he went down because he came in pretty hard on me. I got to see him crash. I didn’t know what position he got, and I really didn’t even care. I just wanted to focus [on myself]. I won the first one, now if I can win or get really small points this next one, that sets me up really good for the third one. But I didn’t want to be cautious because I knew I might crash in the third one and get a tenth or something. So I wanted to be pretty aggressive. But I knew Jason [Anderson] had good pace, so I’m like, okay. A 1-2 going into the last one, I was pretty happy with that. It definitely took some pressure off.

Do you want to comment on being an older racer, like everyone else?It’s just normal now. Thirty plus. I feel like if we did a 30 plus supercross the 20 plus might not be able to beat us. It’s fun being older. We talk about it all the time, and Chad [Reed] would get that question more than me where now that he’s done I’ll get the question all the time because now I’m the oldest. You enjoy it more. It’s the cliché things. You find yourself. Jason and I were just talking and he wants to race for as long as he can. It’s not like the typical thing. And Jason’s probably made enough money he could be fine right now if he wanted at 26, but it’s just the passion for it. Then you retire at 26 and then what? That’s the thing that I always think about. If I could choose anything in the world to do next week, I want to put my gear on and go ride. So why not do it at the highest level and still have opportunities to make good money and travel the world? I couldn’t imagine myself being done at 26 and then just kind of like sit around and twiddle my thumbs. I like it. I enjoy it. I’ll do it for as long as I can.